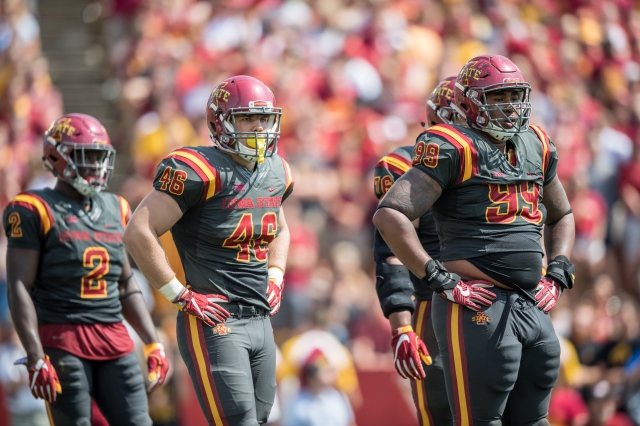 First, Benton earned his degree in accounting and finance in May. He achieved his second goal when Iowa State head coach Matt Campbell told him last week he has been officially placed on scholarship for his final season.

There were no video cameras around to commemorate the event. The news Benton had been waiting to hear came in a private team meeting after another grueling summer workout.

For the humble and unassuming Benton, that is the way he wanted it.

“I just kind of felt a lot of relief more than excitement,” Benton said. “It’s been a long time coming, but I hadn’t even really thought about it too much. My teammates were very supportive and I appreciate Coach Campbell believing in me. I took my parents out to dinner to celebrate, which was a pretty cool moment.”

Campbell never wavered on his decision.

“Spencer has sacrificed so much to help us lay a foundation of success,” Campbell said. “In the last two years, Spencer has stood for everything that we want in our program — on the field and off the field. He’s earned this. I’m just really excited that we had the opportunity to grant him the finality of putting him on scholarship for good. I couldn’t be prouder of him and am really proud to coach him.”

Benton became the “next guy to be put on scholarship” frontrunner with his valuable service as a reserve the last two seasons. He showed incredible promise in 2016 when he recorded 21 tackles, 2.0 TFL and 1.5 sacks. Most of Benton’s production came late in the year, posting 19 of his 21 tackles in the final seven games.

After earning ISU’s Outstanding Walk-On Award (2016), he had 11 tackles and 1.5 TFL to help the Cyclones win their fourth bowl game in school history in 2017.

As an All-American defensive end at Mount Union, Campbell is an expert on the position. He immediately was impressed with Benton when he initially got the job.

“People don’t know the value that he’s added to our defense,” Campbell said. “We talk about playing in big moments. You go back to the Oklahoma game and the snaps he played in there. He showed up when we needed him the most, so I’m really proud of him. He’s been a key factor of why we’ve been able to lay a great foundation here.” 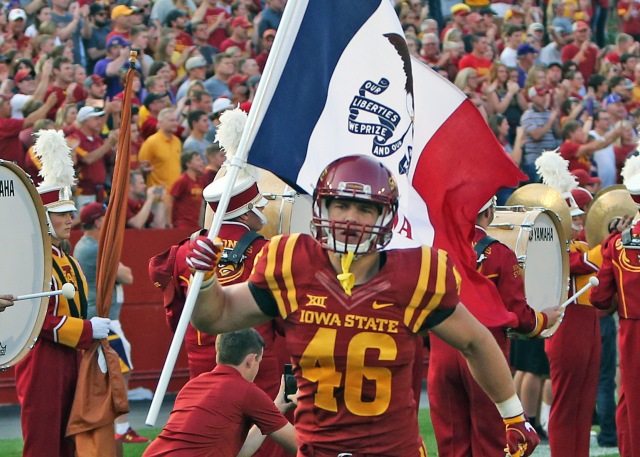 Benton played on 26 snaps from scrimmage on that memorable Saturday in October when Iowa State knocked off No. 3 Oklahoma in Norman. He will never forget that game or the final defensive snap.

“I just remember how physical that game was,” Benton said. “It was a fight until the end. Until the very end. I tried to give it my all until the last pass was incomplete. I just remember turning and seeing the ball drop. When the ball hit the ground, it was the best feeling. I looked around — no flags – the game is over.”

Growing up in Van Meter, Iowa, Benton was a three-sport star, excelling in football, baseball and wrestling. Football was his favorite, however, where he was a first-team all-state selection and a participant in the Iowa Shrine Bowl.

Benton had offers to play college football, mainly from NAIA schools. The lure of playing big-time college football was too strong, so he decided to follow in his brother’s footsteps (Marcus) and tryout for the Iowa State football team with no guarantees.

“Early on, I just had NAIA and a couple of D-IIIs talking to me. I didn’t even have a highlight tape or anything,” Benton laughed. “My brother was a walk-on at Iowa State before me, and he kind of convinced me to try-out for the team. I showed up, tried out and luckily I made the team.”

Benton entered college at 6-2 and 225 pounds in 2014, spending his first two seasons watching from the sidelines.

After adding 20 pounds of muscle to his frame, he found his way into the rotation in Campbell’s inaugural season in 2016.

Taking snaps as a reserve, Benton was quickly proving his worth, but the game he remembers most during Campbell’s first year was the victory over Kansas. It was a game where Benton’s performance had a direct outcome in the contest. Recording three tackles, including two solo stops, Benton was all over the field.

Late in the second quarter, Kansas was driving deep into ISU territory with a 14-10 lead. With a 3rd-and-10 at the ISU 23, Benton broke free and sacked Jayhawk QB Carter Stanley for a six-yard loss. Moving the ball back, KU was forced to attempt a longer field goal than anticipated, a 46-yarder that missed wide right.

It was Benton’s first taste of success.

“That was a great moment for me,” Benton recollected. “I actually got two tackles for loss in that game. Basically I was the QB spy on the play and my teammates did all the work and I just had to make the play. Fortunately I did.”

A strong work ethic has always been a part of Benton’s makeup. His father, Mike, is an auto mechanic, and often Benton is in the shop helping Mike fix cars.

His hard work has carried over into the classroom, where Benton is one of the football team’s most decorated student-athletes. The two-time First-Team Academic All-Big 12 selection graduated with a 3.8 cumulative GPA and was the recipient of the Dr. Gerald Lage Award, the highest academic honor handed out by the Big 12 Conference. He is also ISU’s representative for the National Football Foundation’s Scholar-Athlete of the Year Award.

“I was very motivated from the beginning,” Benton said about his work in the classroom. “When I first got here, they told me, ‘You can structure your plan over four and a half years.’ I was like ‘No, I’m not doing that.’ Academics has always been important to me.” 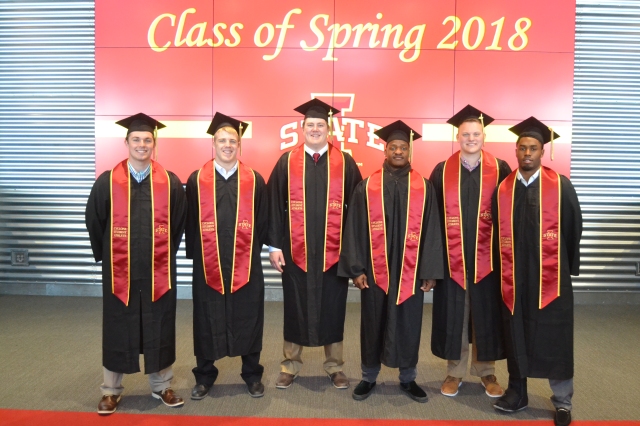 Benton (second from left) earned his degree in accounting and finance in 2018.

The summer is winding down and Benton, who is now 256 pounds, is thrilled to begin the 2018 season as a scholarship athlete in graduate school.

Benton’s approach to the upcoming season won’t change though. He is a member of one of ISU’s deepest and most talented defensive fronts in recent memory and he can feel the excitement in the defensive line room.

“It has been a great thing to be able to go from last year, where we weren’t perceived as being a great unit, to this year,” Benton noted. “We have grown together so much as friends and that’s really translated over to the field. Everyone understands each other and everyone works well together. Coach Rasheed has really done a great job of bringing together that defensive line.”

I'm in my 25th year working in the Athletics Communications office at Iowa State and in my seventh year as Assistant Athletics Director for Communications. My passion has always been ISU Athletics and the seed was planted by my father, Ken, who was an All-Big Eight pitcher for Iowa State in 1960. I graduated from UNI in 1993, where I was a two-year letterwinner on the golf team, and received my master's at ISU in 1997. I've covered volleyball, wrestling, baseball, golf, football and men's basketball at ISU, including 13 seasons as the men's hoops contact. It's an honor to be the football contact for Coach Campbell and the Cyclones. I've got stories to tell, and I love telling them.
View all posts by Mike Green →
This entry was posted in Uncategorized. Bookmark the permalink.