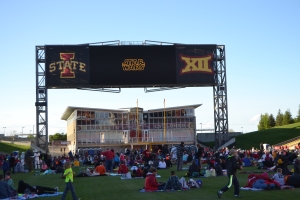 Star Wars: The Force Awakens begins on the Jack Trice Stadium video board.

Editor’s Note: There are no spoilers in this article, I would not want to ruin Star Wars for Matt Shoultz when he finally relents and watches all of them in one sitting.

This story is almost a perfect storm for me, involving two things which I know way more about than the typical person should: Iowa State Athletics and Star Wars.

I have worked at Iowa State for seven years as either a student intern or a full-time employee, been to (literally) thousands of Iowa State athletics events all over the world and it is awesome and an honor which I love every single day. I have seen Star Wars … a lot. While my memory at the ripe old age of 27 fades me, I know I had seen the originals before the Special Editions came out in theaters in 1997, Star Wars has become something I love.

While I do not consider myself a stereotypical “Star Wars nerd”, I am guilty of some offenses to being a nerd, such as skipping History 318 my senior year at Iowa State to buy the Star Wars Saga on Blu-Ray … and only watch the special features, reading the entire Luke Skywalker entry on Wookiepedia (that is not a typo) and preparing a plan to see The Force Awakens in Omaha in case the volleyball team made the Final Four the weekend it came out. 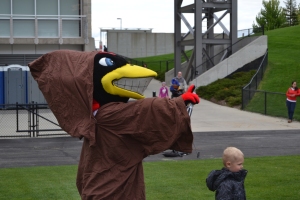 So when we announced that The Force Awakens was going to be the Jr. Cyclone Club (JCC) Movie Night film this year I was pumped. Obviously, Movie Night’s target audience is not mid-20s Iowa State Athletics employees, but I was not going to point that out. Either watching a movie one likes, or to play FIFA soccer video games on the Jack Trice Stadium video board is one of those things males who have watched TV or played video games in the last 20 years talk about, and never expect to actually happen. 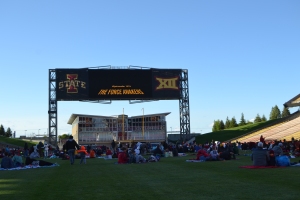 Except this time it did. I was based out of my office in the Jacobson Building helping cover our track and field team out at the Big 12 Championships, so it was a short walk outside to see what was happening right when the gates opened. While people were staking out their territory to watch the movie, another thing I noticed was that a lot of kids brought balls to play catch on.

Like the dream of seeing a movie on the video board, it made me reflect on how many kids just loved the opportunity to be on the field of Jack Trice Stadium. When I was a kid, and we visited my parents’ families in Carroll and/or Fort Dodge, my dad always made it a point to make a “pilgrimage” to Jack Trice Stadium on the way back home to West Des Moines. Most of the time it was just to drive past the stadium, sometimes we walked up to the gates to the field just to see it. It always made my dad’s day, just to see the field and the stadium and know that football season would soon be here, no matter if it was December, April or July. 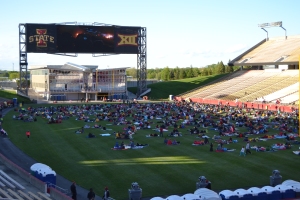 The crowd at Jack Trice Stadium ready for The Force Awakens

The stadium still holds that kind of pull. Most days, I see people pulling up to the stadium or coming into the Jacobson Building, just to say they were there. They know they are not getting on the field, or in the stadium, but just being there does it for them. In May 2011 when Osama bin Laden was killed, the night-long celebration eventually went to the stadium. The plan was not to go into the stadium, but people just felt the celebration that had already been taken from The Knoll, down Lincoln Way, up Welch Ave. and through Greekland needed to stop by the stadium, too.

I am lucky. I get to see the stadium, and by being in the Jacobson Building, more or less be in the stadium every single day. While that does not enter my mind every day (I have to get to work!), when it does it allows me to appreciate what I do and who I get to work for. 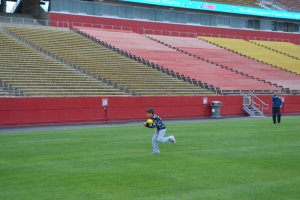 Then I think about those kids at the movie tonight. For many of them, Movie Night is the one night a year they get to take the field at Jack Trice Stadium, just like their heroes on Saturdays. Getting to tell your friends at school that you played catch in a college football stadium, and saw Star Wars at the same time is a double whammy that will give them bragging rights for a while.

When I visited Texas A&M for the first time in 2010, I snuck into Kyle Field (the hole in the fence was probably not an “entrance”), and went right to the corner where Todd Blythe caught his third touchdown against the Aggies in 2005, just hoping Bret Meyer would magically show up and toss one up for me to go after.

So while tonight was about getting to see Star Wars at Jack Trice Stadium, it was also creating memories, even if they do not all involve Han Solo, Rey and Kylo Ren. 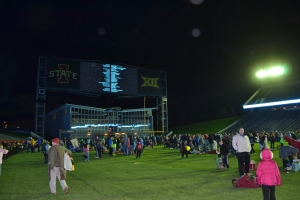 The satisfied (and probably cold) moviegoers head home for the night.

I'm in my third year as Assistant Director for Athletics Communications at Iowa State. I work primarily with ISU's volleyball, track and field and gymnastics teams. I worked as a student assistant in the Athletics Communications office from 2008-12, working primarily with swimming and diving along with other sports in minor roles. I got my ISU degree in Journalism and Mass Communications in May 2012. Last year I worked as a Graduate Assistant in the TCU Media Relations office, working with track and field and swimming and diving. I look forward to providing insight on what is going on in and around Iowa State Athletics. I'm on Twitter @PatrickTarbox. Go Cyclones!
View all posts by Patrick Tarbox →
This entry was posted in Iowa State Athletics. Bookmark the permalink.