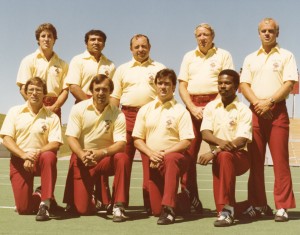 The 1978 Iowa State football coaching staff with Carroll (back row, first from left) and Williams (back row, second from right).

Last week, Cyclone Sidebar covered the unique connection Iowa State has to the two head coaches in Super Bowl XLVIII. As was mentioned, Iowa State in the only team, professional or collegiate, that can claim that both Pete Carroll (Seattle Seahawks) and John Fox (Denver Broncos) previously worked at. Carroll and Fox both coached the secondary at ISU, Carroll in Earle Bruce’s final season (1978) and Fox under Jim Criner (1984).

Through the hard work of Mike Green, another connection was found. Even though Carroll and Fox worked under different head coaches at Iowa State (and both missing the Donnie Duncan era in-between), both staffs had one assistant coach in common they worked with – offensive line coach Jim Williams.

“Both Pete and John were on the other side of the ball from me,” Williams said. “Like all football staffs, we worked together in recruiting and passed around ideas in that area quite a bit.”

The Super Bowl head coaches from their time at Iowa State.

Williams is a unique story in Iowa State football history, having worked for three different Cyclone football staffs in the 1970s and 80s. He did that after becoming one of the most successful coaches in Iowa high school football history.

I graduated from Dowling Catholic High School in West Des Moines in 2007 and had the honor of having Williams as my offensive line coach during my two varsity football seasons in 2005 and 2006, his first two seasons back in the program after a 30-year journey in collegiate coaching. He was a legend at DCHS.

Williams came to Dowling in 1964 at a time when the Maroons were among the worst teams in the old Metro Conference. Losses that are inconceivable to Dowling Catholic fans now, but were common place then. After an up-and-down first year, Williams only lost one more Metro Conference game en-route to 11-straight conference titles.

When the dust settled, Williams finished his Dowling tenure with a 118-9-3 record. The only blemish was that Williams had not led Dowling to an official state championship (the IHSAA first started sponsoring the high school playoffs in 1972), earning three runners-up trophies in the first four years of the playoffs. Williams was also the Athletics Director at Dowling Catholic, starting in 1969.

After the 1975 season, and not for the first time, Iowa State head coach Earle Bruce called Williams enquiring about joining him in Ames to coach the offensive line.

“I had a couple of chances before to leave, and I decided to stay at Dowling,” Williams noted. “Earle offered me previously, but I had decided at the last-minute to stay. Three years later, he called again with the o-line job in hand. I was 45 years old, if I was ever going to make that kind of move I had to make that move then. It was an opportunity that I felt I had to make. It was difficult to leave Dowling, we had some great teams in the pipeline. You are leaving something you are going to miss, but you are headed for a new adventure.”

It was Williams’ third season at Iowa State in 1978 when a young up-and-coming coach named Pete Carroll joined the staff. It was Carroll’s job to watch over the Iowa State secondary, and even though Carroll was just 27-years old, Williams could see he had a big future ahead.

“Pete was a high-energy guy that was very bright, you could tell from the day you met him he had a great future,” Williams said. “He was a tremendous on-the-field coach and did a great job building personal relationships with the players, which in turn helped him in recruiting. He was a tremendous recruiter. It is tough to see that far out back in 1978, but you knew by the way he worked and presented himself he was going to make a name for himself.”

Carroll went with Bruce to Ohio State after the 1978 season when Woody Hayes was fired. Bruce, a member of the College Football Hall of Fame, had made an impression on Williams during their three seasons together.

“Earle was a real good football man,” Williams stated. “He had great knowledge of all aspects of football, though he was primarily an offensive coach. He was a high school coach at heart from his time in Ohio. He loved the game of football and got the best out of the players in the program. He cared about the kids he would bring into his program.”

While Bruce and Carroll were off to Columbus, Williams stayed in Ames to continue his work as offensive line coach under Donnie Duncan. The new Cyclone head man had a great deal of respect for Williams and named him assistant head coach. With the role came many more responsibilities, but that did not deter Williams.

“Donnie was one of the best people I have ever been around, I enjoyed working with him,” Williams said. “He gave me the job and let me be. He felt the coaches he hired were capable, so he let them do their jobs. As assistant head coach, I had duties beyond the offensive line, usually the call-in and postgame shows which Donnie didn’t like to do. He was just a wonderful guy, and a good recruiter who got along great with everyone.”

Williams getting feedback from his linemen after a series.

After Duncan’s tenure came to an end following the 1982 season, Jim Criner made the transition from then-Division I-AA Boise State to Iowa State. Williams and Criner worked together for three seasons.

“Jim was a bright coach,” Williams said. “He had the best knowledge of special teams play that I had ever been around. I had never seen a head coach so involved in the special teams.”

In Criner’s second season he brought in a defensive backs coach from Kansas named John Fox to hold the same position at Iowa State. Though they only worked together during the 1984 season (Fox headed to the USFL in 1985 to work for the Los Angeles Express), Williams noticed that Fox was a person who had a future based on how he worked.

“I didn’t know John as well because he was at ISU for such a short time, but he was another bright coach,” Williams said. “He worked very hard on game-planning and implementing ideas that would help us win games. He obviously didn’t know that someday he would coach in a Super Bowl, because he was focused on the job at hand.” 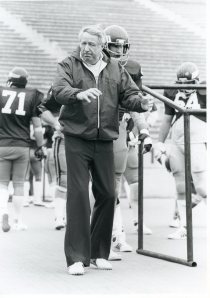 Williams at work on the practice field.

Williams left Iowa State after the 1985 season and landed as the head coach of Simpson College in Indianola. In his 15 years at the helm of the Storm, Simpson won four Iowa Intercollegiate Athletic Conference titles and made six trips to the Division III playoffs before Williams retired after the 2001 season.

At 68 years old, it looked as if Williams was ready to ride off into the sunset after coaching since the day he graduated from UNI in 1957. It was just four years later that he got back into coaching. Williams returned to Dowling Catholic in 2005 after new head coach Tom Wilson struck up a conversation with Williams that led to the offer to become DCHS’ offensive line coach.

“When Tom was hired, I never thought I would be back coaching,” Williams said. “We talked about how to maintain the traditions of Dowling with his vision for the program and he said he would like to have me as Dowling’s o-line coach. I didn’t know how it would work, or how I would relate to high school players almost 30 years later. I did it as an avocation and thought I would do it for a few years.”

Most people thought that Williams coming back to Dowling would only be a short-term job. Yet as Wilson enters his 10th year with the Maroons, he will have Williams on his staff again. Williams turned 80 in December, but he keeps coming back.

“Part of the reason I keep coming back is I like how coach Wilson runs the program,” Williams said. “He keeps his players accountable, and I feel that is the way it should be. I enjoy coaching just the o-line. I don’t have to worry about grades or parents like the head coach does.”

Williams’ commitment to Dowling Catholic has brought him something he never got in his first stint at Dowling, a state championship. Williams has now been part of two state championship staffs in 2010 (coaching current Iowa State tight end Ben Boesen) and this past season. For his contributions to DCHS throughout his career, the weight room was named after Williams in 2011. It is not just the winning that keeps Williams coming back.

“I enjoy the process,” Williams said. “I enjoy watching the kids develop, I enjoy the preparation for opponents and I enjoy practice. The games itself are just the cherry on top each Friday night. Developing young men for the real world both physically and mentally is something I still enjoy and want to do as long as I have good health. I can’t reach block or demonstrate like I used to, but I have never seen coaching as a job. I see it as an avocation.”

Having worked with the two NFL head coaches early in their respective journeys to the Super Bowl, Williams has a formula for the next coaches who want to make the sport’s biggest stage.

“If you do your job right where you are at, and not look too far down the road, then everything will work itself out,” Williams concluded. “There are so many coaches who are looking for the next step over the job they have. The job you have will help you more than anything else in the moment.”

I'm in my third year as Assistant Director for Athletics Communications at Iowa State. I work primarily with ISU's volleyball, track and field and gymnastics teams. I worked as a student assistant in the Athletics Communications office from 2008-12, working primarily with swimming and diving along with other sports in minor roles. I got my ISU degree in Journalism and Mass Communications in May 2012. Last year I worked as a Graduate Assistant in the TCU Media Relations office, working with track and field and swimming and diving. I look forward to providing insight on what is going on in and around Iowa State Athletics. I'm on Twitter @PatrickTarbox. Go Cyclones!
View all posts by Patrick Tarbox →
This entry was posted in Football and tagged Donnie Duncan, Dowling Catholic High School, Earle Bruce, Jim Criner, Jim Williams, John Fox, Pete Carroll. Bookmark the permalink.