A native of Cedar Falls, Iowa, Loenser brings an incredible amount of experience to the men’s basketball program with six seasons under his belt as an assistant coach at Southern Mississippi for former ISU head coach Larry Eustachy. He’s also has had a pair of stints as a head coach in the Iowa high school ranks – his first at Northern University High School (Cedar Falls) and his most recent at Spirit Lake High School.

So what would make, Loenser, a 2001 Iowa State graduate, decide to return to Ames at the age of 34 to be a graduate assistant?

“To be honest with you, the decision was very easy,” Loenser said. “This is home for me. I went to school here, my folks went to school here, and I’ve been coming to games at Iowa State for as long as I can remember. Also, to have the opportunity to work with a great guy, and a great coach, in Fred Hoiberg, and to work with the staff that’s in place was a huge factor. The whole situation was a no-brainer for me, and I’m very excited to help out my alma mater.”

Loenser’s experience and skill-set will certainly pay dividends for the Cyclone basketball program. He’s been a coach on the floor, mastered scouting techniques at the Division I level and mentored countless athletes toward success.

Simply put, Loenser will be a huge addition to the program.

“I just think the biggest advantage for me, especially in talking to Fred and the other coaches, is having Division I experience and the knowledge of scouting against other programs,” Loenser said. “Having six years of D-I experience has allowed me to meet a lot of different people and those relationships will hopefully help our program get better and better.”

Loenser has been a success in life and an inspiration to many people throughout his career. Loenser was born without a left hand, but that didn’t stop him from achieving in multiple sports in high school. He’s never let his disability get in the way of his dreams.

“I just think the biggest thing is that it was a blessing for me to be made the way I am and I think we all have differences and things that are unique about ourselves,” Loenser said. “I just happen to have something that maybe more people take notice of, and that happens to be that I have one hand. I was very, very active growing up. I played baseball, basketball, football and golf and there was nothing that was going to stop me from participating in those sports.”

Loenser was an outstanding prep athlete, but baseball was his favorite sport, earning all-state honors in high school. He worked tirelessly to realize his ultimate goal of playing baseball at Iowa State, succeeding in his vision as a senior in 2001.

“It was always a dream of mine to play a sport at Iowa State,” Loenser said. “It just happened to be that baseball was where I experienced a lot of success and where I got the chance to wear the Cardinal and Gold. It was a short time, but I’ll never forget making my debut against the University of Iowa and having an at-bat against UNI in my hometown. It was the greatest feeling to get the chance to represent the school that I love so much.” 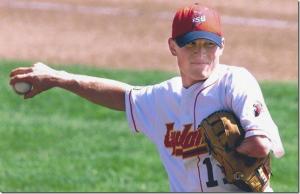 I'm in my 25th year working in the Athletics Communications office at Iowa State and in my seventh year as Assistant Athletics Director for Communications. My passion has always been ISU Athletics and the seed was planted by my father, Ken, who was an All-Big Eight pitcher for Iowa State in 1960. I graduated from UNI in 1993, where I was a two-year letterwinner on the golf team, and received my master's at ISU in 1997. I've covered volleyball, wrestling, baseball, golf, football and men's basketball at ISU, including 13 seasons as the men's hoops contact. It's an honor to be the football contact for Coach Campbell and the Cyclones. I've got stories to tell, and I love telling them.
View all posts by Mike Green →
This entry was posted in Men's Basketball and tagged Nate Loenser. Bookmark the permalink.